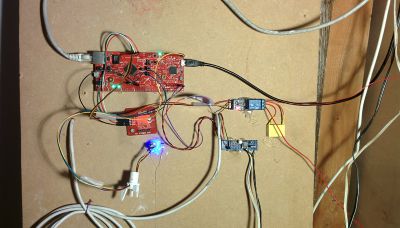 The new front doorbot is based on the ACNode infrastructure, specifically a TI Connected Launchpad, a PN532 NFC shield with a generic Arduino relay board. The bell is a 24VAC-powered generic doorbell, and currently bell presses are not detected by the doorbot.

The front doorbot sends out notifications about starting up and scanned cards via UDP to the global broadcast address 255.255.255.255 on port 50002. Any network device can listen in to these messages and set up their own bot/reporting infrastructure, etc.

Currently, the front doorbot uses a branched version of acserver which runs on acserver port 1235. This will be changed once all ACNodes are upgraded to the new firmware, which includes doorbot support.

The back doorbot is the same as the front - with two differences: there's no bell, and the relay is activated by setting the pin state to HIGH. This instance sends notifications to port 50000.

The source code for the software is on Github.

All the logs go over the network to /var/log/network/ on boole.

The access list is JSON file. The acserver downloads a new version of the carddb file every 5 minutes from Turing (the machine that runs the website).

The door opener broadcasts on the network whenever the door is opened by a member using their card , or if the front doorbell is pushed. The back door broadcasts on 50000, and the front uses 50002, so we can tell the difference between them in the various listeners. This is a stop-gap until we add the door ID to the messages.

There are listeners on hamming that connect to robonaut to announce on IRC, and flash the lights using Lighted. By default, this will include your full real name. If you wish to change this behaviour, you can set up a nickname in the cards section of the member area.

hamming also runs listeners for the scrolling led board and the audio announcements.

The announcement listener uses the GLaDOS voice. You can generate and use your own file as a greeting.

The code that runs the bandwidth meter on tesla also listens for doorbell and member entry messages.

Access is based on the RFID UID - it is not the number written on the back of your Oyster card. There are three ways to add a card:

Doorbot audio files are stored in /mnt/doorbot-sounds/wavefiles/members. (Mounted on systems from colin:/doorbot-sounds) Set your wave file (in wav or mp3 format) on the members site. You may copy the files into the directory via chomsky.

Many early members enjoyed doorbot audio greetings in the style of GLaDOS - an artificial-intelligence sounding voice used in the Portal series of video games and in the movie Pacific Rim. Want to fit in with the 'classical' spirit of the Hackspace? Generate your own GLaDOS voice file on this site here.

There is a guide on Youtube made to show the process as its hard to describe simply in text: http://www.youtube.com/watch?v=OE8S9knXcW0

The original GLaDOS voices were generated by oni following the method found by Tom Wyatt. To create a GLaDOS voice one must do the following:

If you make changes or discover a problem with doorbot, please add it to the logbook.

Note that killing the python script will be announced and emailed by Monit. To start or stop doorbot, use:

On babbage, the listeners are at /usr/local/bin/Doorbot/listeners