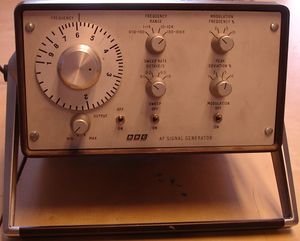 Beware This unit has a built in amplifier. The loudspeaker terminals on the back can produce up to 40volts pk-pk. You can blow up things like computer audio inputs!

The loudspeaker terminals on the back can produce a lot more current than a typical 600ohm signal generator output.

The low level audio output requires a quarter inch jack plug. There isn't one handy with the unit.

It contains an ILP amplifier module. It my experience the overload protection on those would not protect it from all possible loads. It may be easier to blow up than a typical 600ohm signal generator output.

The frequency dial is a bit wobbly and dosn't stop distinctly at the ends of it's travel. The variable resistor inside may not be in top mechanical condition. 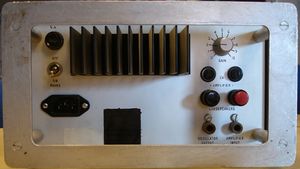