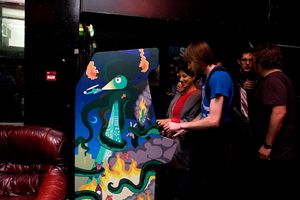 It has indie games on it, and emulators.

Don't change these, as it'll break all the indie games that rely on them.

This lives at http://github.com/v21/Boinger. Any improvements gratefully welcomed, although you will need a Pro version of Unity3D to compile it. I know, sorry. One improvement would be rewriting it to not require this.

Adding games to the launcher

All games should run fullscreen at 1024 * 768 resolution. They should also survive being exited abruptly, as the launcher software isn't particularly gentle when it quits things.

The launcher reads the games avaliable from a json file called local.json, which sits in the arcade_games folder linked on the desktop. If The Beast is plugged into the network, it should appear as a Windows fileshare on machine //INDIEBOX/

The splash screen is the screen that's displayed on the arcade machine when cycling through the games. This works best if it's a 1024 * 768 png. Ideally it'll be exciting and eyecatching, tell people what the game is and who made it, maybe tell them what keys to press and maybe exhort them to push start. But it's up to you.

Alternatively, you could load a splash video. This needs to be in ogg format, and goes in the "splashScreenPath" variable. You also need to set the variable "splashIsVideo" to true.

I've just been dumping all the games into the arcade_games folder, accessible via the public share.