Difference between revisions of "Laboratory 24/Network"

NOTE: IMPORTANT: THIS PAGE IS FOR THE OLD HACKSPACE! IT IS TOTALLY OUT OF DATE!

Lab24 has a number of network points, wired across the false ceiling. These terminate in the quiet/class room cabinet.

All these diagrams are wrong. 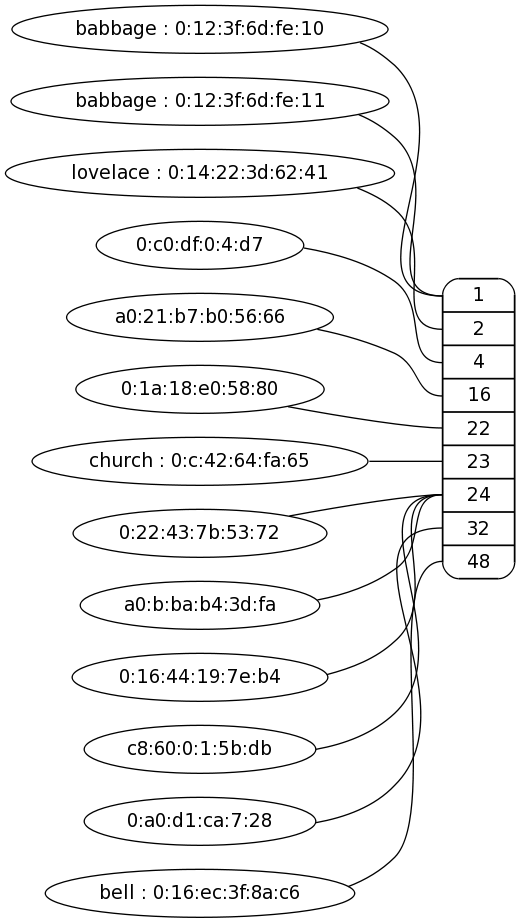 Mac addresses without names where unknown at the time the diagram was generated.

Port 24 has the fonera on it, which is why it has so many things.

No, i don't know why babbage has 2 mac addresses. 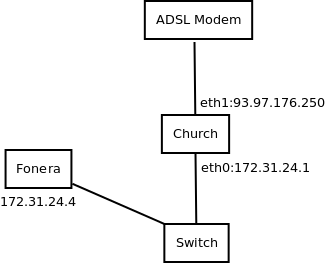 Our internet is the Be Pro service:

We use a Draytek Vigor 120 modem which simply bridges the ADSL to ethernet. You can access this at http://192.168.2.1 (no username/password). The Internet light doesn't come on, presumably because it's in bridge mode. NB it doesn't like the LAN port being disconnected: doing it twice in short succession will cause it to stop responding to traffic on that port (presumably some weird arp issue). Restart both the router and modem at the same time to prevent this.

In addition to the Fonera (and probably replaceing it?) we have a Netgear 3700v2 donated by Dave Täht of the bufferbloat project. It runs a custom build of OpenWRT called CeroWRT please see that page for builds and installation instructions.

We also advertise and route IPv6 within the space. This is currently tunnelled to Hurricane Electric. The account is currently with Mark, but will be transferred whenever someone asks.

We do not use DHCP for IPv6 at the moment, so do not provide automatic rDNS. Servers are set up for DNS under hack.rs, which is also currently with Mark.

As an experiment, we block inbound IPv6 except for port 22 (ssh), on the assumption that most people don't even realise IPv6 is on. Please shout if you actually need inbound connections to the space. DNS isn't enabled yet.

We have a Uqiquiti UniFi AP (Flying saucer shaped thing in on the ceiling of the main room), if configured from babbage. It does 802.11bgn on 2.4Ghz

We also have a Netgear WNDR3700v2 (thin black box on top of the rack). - this used to run cerowrt but has now been changed to OpenWRT - CeroWRT want's to route everything which isn't useful for us and also it was using SSID's that no-one used. It does 802.11an on 5Ghz. config interface here. The reg domain was 'fixed' to support GB properly using this guide. If you have problems with 5Ghz just switch this access point off and tell the mailing list that you have done so! :)

LondonHackspace - WPA2PSK, you can find the key written on posters on the walls of the rooms in the hackspace.

They are connected together via a 2 port trunk on ports 47 and 48.

They run different versions of the firmware, and should probably be upgraded sometime.

We also have 2 small unmanaged switches, one is under the laser cutter for coolbot and layz0rs, and one is by the smaller touchtable and was used for the stratasys. Both should be replaceable (or almost replaceable) by the new cabling.

Working on the network

All members have access to the servers, and with that, the ability to make changes. It's crucial to remember that this is a shared network and any changes you make will affect others. In particular, please don't install updates or restart machines without a good reason and checking on IRC first.

Each piece of hardware will have its own logbook page on the wiki, where you should log significant changes and problems.

Some servers, such as Babbage, run services written for the space, typically running in a screen session. The code for these can be found on Github.

A list of things that could be done to make the network better.