HackSat1 will be in LEO. In order to receive signals in the space we'll need to build a ground station and control room. Ideas or experience in this area needed. 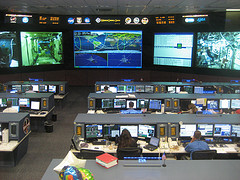 Artist's impression of the quiet room equipped for the mission. Courtesy of Jeff Hester.

Following comes from the KickSat project:

The signals will be in the 70 cm band (around 437 MHz) at about 10 dBm EIRP. All Sprites will be on the same frequency and will use orthogonal PRN spreading codes for both unique identification and signal processing gain.

To receive the signals, you'll need a yagi antenna, a rotator, an LNA, and a software defined radio (SDR) interface for your computer. We've been using the USRP from Ettus Research, but it's pretty expensive, so we're trying to make everything work with the (much cheaper) FUNCube dongle (http://www.funcubedongle.com/) as well.

Russ owns a USRP, does he have a daughter board that covers 437MHz?

Looks like the kicksat's don't have a battery so they are only going to transmit when they are in daylight. No point listening when it's nighttime here.

The signal from a kicksat will only be receivable if you have a clear view of the sky where it is. If there is a building in the way you won't receive it. At the hackspace there will be a much better chance of receiving a few beacons if the antenna is up on the roof of the business center instead of on the balcony with a much more restricted view of the sky. We don't offically have roof access.

I suspect the 10dBm EIRP figure is an optimistic best case. The kicksat's are going to tumble in space and the radiation will be mostly perpendicular to the wire antenna. The received signal is going to fade in and out as it tumbles, plus there may be polarisation loss. I'v put some numbers into a free space path loss calculator. I suspect that a 10dB gain yagi is about the minimum for a chance of receiving a few beacons if you get it pointed in just the right direction at the right moment. Thats a three foot long antenna. A bit more antenna gain would help a lot but a 15dB gain 70cms yagi is a fifteen foot long antenna and an engineering project to mount and motorise it so it can both be rotated and angled with computer controlled tracking.

Given the RF enviroment of the business center roof; a mobile phone base station right on top of the building plus various very strong UHF PMR signals from other London rooftops it may be worth borrowing a breeze block size 70cms bandpass filter, we know a tall person who has one. Software radio's are limited in their ability to cope with strong signals near a weak signal that you want to hear. There is a continuous trunked radio control channel on 440.0375 that is a huge signal on London rooftops. It's right on the edge of the ham band, the only way of keeping it out of a ham receiver is a cavity filter the size of a big propane cylinder. A high sensitivity receiver connected to the antenna with as short as possible a length of thick coax might work better than using an LNA, assuming that having it right next to the mobile phone base dosn't overload it anyway. The USRP might have to be in a big metal box with filtering on the power connections etc to work up on the roof. The primary purpose of a masthead LNA is to amplify the signal before some of it is lost in the antenna cable. Even thick expensive coax looses a few decibels at UHF over a sixty foot run. Probably worth borrowing an LNA anyway.

As for a control room, the whole point is for it to look impressive so it needs so it needs a load of screens showing diagrams of orbit's and flashy graphics. It needs an intercom or radio base station with moon-landing-style shrill roger bleep to talk to the guy up on the roof who is doing all the work waving a yagi on a broom handle about looking for the strongest signal. "Eagle's Nest, this is Hoxton Space Center, do you read me BLEEEEEP!!!" --AJP

The aerial suggested to be used for the reception may be enhanced by using a cross-yagi. It's been used for AMSAT/OSCAR amateur radio communication as preferred option, canceling out most of the polarisation loss due to satellite rotation/tumbling. The complexity on the aerial will increase,but its a "passive" gain,where you will be able to get longer passages on each orbit, and also a steadier signal overall.