Yup. That's the one.

The intention is not to create a commercially available/viable kit.

TRTL is intended as an educational/learning device. It is not a toy to keep. it is only just for christmas.

TRTL should be built upon existing open hardware/software stacks. ones with active/lrage communities attached to them. This will make the transition from TRTL to general hacking a simple process. It also adds value to the kit - the purchaser not only gets a TRTL bot and its inherant educational process, but also an 'AVR clone' - the entry point into the land of arduino.

We know the designer. We know the hardware. We can customise it and build just the 'AVR' part (ie the arduino compatible bit) for much less than a nanode would cost. Once the TRTL is built, if the owner wants to progress further into the hacking arena, he/she are presented with two paths. stick with the arduino clone, or build up the remaining nanode components to get a full blown nanode.

Ken Boak has supplied the following as an outline costing:

we will take the higher costing of 10.20GBP as a conservative estimate of cost.

As production of the nanode becomes more efficient the cost is further expected to drop. A figure as low as 7 GBP has been estimated. However until a nanode has been delivered at this cost level, it would be foolish to assume that it will.

Arduino is an easy to use prototyping language developed for ATMega32 based microcontrollers. There is massive community support for all things arduino. This choice is in line with the project aims to build on existing community supported platforms.

The use of bitlash is up for debate since i cant think of one good reason it should be used over an arduino sketch, but i like the idea of creating custom functions and executing them for movement et al.

How much should it cost

There will be numerous prototype. Initial outline is five.

Aim - to build a TRTL bot and get a rough cost estimate for this prototype Only buy items that can also be bought in bulk. Do not include postage costs of materials.

Generate interest for the project.

1 x bluetooth module for serial communication to AVR via SPI

4.69 GBP - bluetooth module for serial communication to AVR via SPI (eBay - many sellers)

All costs in GBP

4.69 - 1 x bluetooth module for serial communication to AVR via SPI

supply kit to intended user. ask them to build it. debrief/review

Should be the finished version.

Logic connections to the SN754410 QUADRUPLE HALF-H DRIVER are as follows: 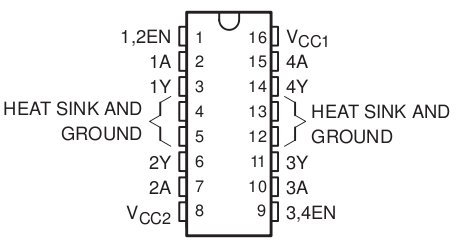 Upload the source code and ensure that everything is connected properly. Now note which way the motors spin and change the polarity of 1Y and 2Y (i.e. literally swap 1Y with 2Y as it is connected to the motor) or 3Y with 4Y in order to ensure that the left and right motor are spinning the same way at the same time while the demo code is running.

There is a Github Gist of the H-bridge control here: [1]

board and electronic details http://www.cutedigi.com/product_info.php?products_id=4360