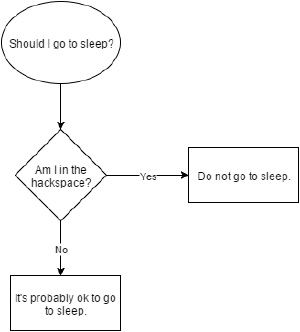 There's broad consensus among members (and non-members alike) that sleeping at the Hackspace is Not Good, which means that you really shouldn't do it. Hackspace is a place for working on projects or being otherwise creative, not somewhere to crash out.. It does not matter how much, how long, or how hard you've worked on a project (even if it is for the Space), you are not entitled to sleep in the Space.

In particular, everybody at London Hackspace has the right to ask you to wake up and hack, or go somewhere else to sleep. As a community, we really really don't like people who either argue and are rude when they're woken up, or just go away and go back to sleep when the person who has asked them has left.

If you don't have somewhere good to stay, here are some resources that may be useful:

People who've been asleep for more than 15 minutes are likely to be grumpy when woken. If you want to be nice (you have no obligation to), avoid antagonising them and get them a cup of tea or water. You might also like to ask how they're planning to get home: at least they will have a chance to explain why they've ended up staying so late.

It's important for us to keep track of repeat offenders, so please let the list, IRC, or the directors know if you think it's unlikely to be a one-off.

Every couple of months this erupts again here is the story as I (SamLR) see it: