The general plan, with thanks to Maria, is: obtain dna samples, extract dna, pcr dna with amelogenin primers, and then run that on agarose gel.

I figure we try to arrive at a definitive list of stuff (bill of materials) we need for the experiment, and source the bits we still need, perhaps avoiding unnecessary multiple delivery charges.

There is also a need to figure out how long this will all take and schedule it. The overall duration from start to finish is going to be quite long.

It might help to try out some parts, such as the extraction, before hand, although I don't see how we know whether that works until we run it through the rest. We could practise making gels, running a ladder on them, to figure out mixtures and timings and practise with detecting the dye.

Current plan is to sterilise plastic sticks for consenting adult volunteers to rub inside their cheeks. Legally (I am so not a lawyer, and this is not legal advice), reading them a written spiel and getting their verbal agreement with witnesses and seeing them take the sample seems to be sufficient , although the suggestion has been made that a simple signed form might help avoid a possible problem with forgetful witnesses.

cotton swabs are another possible option.

There are a number of written protocols out there

This seems to be the typical hackers version [6] which is basically soap to lyse the cells and then meat tenderiser as a protease and separation using alcohol. Reagents are all commonly available, so seems safe enough. will this will work with PCR?

Katherine Aull was boiling hers to get lysis and denature the proteins.

do we also need to do DNA precipitation? [7] why?

The sampling and extraction are crucial steps if the following steps are to work. dna contamination can be amplified in the pcr stage. there is a suggestion that there is an amount of black art in getting this to work well. It might repay the effort to try several different extractions and run them side by side for comparison.

paper more-or-less at random, Eng 1994 where it gives:

PCR Amplification of the Amelogenin Locus The primers used to amplify the X and Y amelogenin sequences were previously described by Nakahori and colleagues [6]. The primer sequences are as follows: primer AMXY-1F (5'-CTGATGGTTGGCCTCAAGCCTGTG-3') primer AMXY-2R (5'-TAAAGAGATTCATTAACTTGACTG-3') PCR was conducted using the Perkin-Elmer GeneAmp | PCR System 9600 Thermal Cycler. Genomic DNA samples were amplified in a 100 txL reaction volume containing 0.2 mM of each dNTP, 50 mM KCI, 10 mM Tris.HC1 pH 8.3, 4.0 mM MgC12, 120 pmoles of each primer, and 2.5 U Taq polymerase. PCR was run for 30 cycles of 94~ for 1 rain (denature), 65~ for 2 min (anneal), and 72~ for 3 min (extend). Following amplification, the PCR products were analyzed by electrophoresis on 1.2% agarose gels run with 1 X TBE (89 mM Tris borate, 89 mM boric acid, 2 mM EDTA) or 6% nondenaturing polyacryl- amide gels run with 1 X TBE. The gels were stained with ethidium bromide and the fragments were visualized by fluorescence under ultraviolet light.

Andy suggests that we go with the instructions on our polymerase for the PCR.

There is a question mark over whether we need a smaller pippette, or perhaps we can let out some solutions to use a larger volume. Katherine Aull was using syringes.

We need tubes for the thermal cycler.

We have SYBR green to replace the ethidium bromide.

It seems we need to manufacture new electrophoresis equipment or has someone taken it to be repaired? I looked into the possibility of making the gel tray as a single bent piece, but the guys I know said they couldn't do it on 5mm acetate.

We are still looking for a better alternative to the copper electrode that gets eaten by the reagents.

It is common to run reference samples (ladders) alongside the samples, so as to see that weight of the sample. would also be handy to calibrate this process first. ladders can be bought, do we already have?

So, we need TAE or TBE for the buffer.

SafeView and SafeWhite are from NBS Bio. There are manuals and safety sheets there.

What we are looking for

It seems that the lines at X=977bp are in different positions in the male and female lanes in the cybertory example. discuss.

Individuals with deletions such that this test doesn't work on them are extremely rare. So we hope to get correct results for all samples. We discussed blinding the samples to avoid possible bias in interpretation reading the gel, but if we can photograph the gel that could serve that purpose.

It might be nice to do video recording and a write up.

On this date, we had not yet received our PCR tubes, so we were unable to do PCR. Instead, we decided to test our ability to do electrophoresis, using a DNA ladder and SafeWhite stain. We followed the following protocol:

The reference I used for this protocol: http://www.biocompare.com/protocols/protocol/318/Agarose-Gel-Electrophoresis.html

Unfortunately we were unable to detect any green glow which would indicate that the DNA in the ladder had bound to the Safewhite.

We resolved to make the next test a simple visualisation test: combine ladder with Safewhite and attempt to visualise under UV.

Nicholas combined 2.5ul SafeWhite and 2.5ul DNA Marker-D. He was unable to make this mixture glow under UV.

Nicholas performed the same protocol as in the "First gel run, Dec 7, 2011", with the following changes:

We successfully visualised a ladder using the following protocol:

our Technical datasheet gives numbers for water to add to rehydrate our primers to 100uM.

More details on the days results and our discussions: /results-20120212

Tried two new DNA extraction protocols (Chelex and Meat tenderiser). The problem with both of these protocols is that we have no idea how much DNA we are actually extracting. Perhaps we are extracting too much. "There is really no lower limit," says Bugs, because PCR will amplify the DNA.

We followed the recommendations from bugs for primer strength and overall reaction volume (see the notes from the 15th).

We set the thermocycler to the program mentioned in a paper which used the same primers (see notes from the 12th):

Unfortunately we ran out of time and did not wait for the thermocycler to complete for visualisation. we will do that next week.

This week we ran a gel for the results of last week's work. Buffer was ~20g of 10xTBE diluted with ~200g of battery top-up water. Gel was made with ~1.0g of agarose in ~100g of buffer, and 5u of EthBr added. We judged how much to pour into the tray by eye, but when the wells came up very shallow, we thought maybe use the scales in future.

For whatever reason, the experiment was not a success. We couldn't visualise anything. The ladder was a barely-discernible smear, and none of the other lanes was visible at all.

We decided to do another run: Nicholas, Helena, Mike, and Tonderai contributed DNA for overnight PCR. 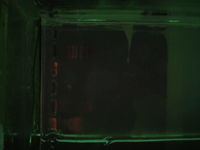 It is hard to see, but it almost looks like lane 4 (Tonderai? Or was it Mike?) is almost right -- there seem to be two distinct bands.

We did not cover the master mix / primers / template solution with oil. The PCR reaction vessels had condensed liquid all over the vessel, including up near the lid. I (Nicholas) theorise that the mixture evaporated, inhibiting PCR, in some cases severely.

Attempt to remedy evaporation during PCR: 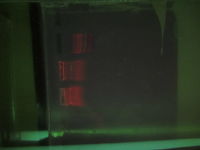 Once again, two distinct bands are visible, but they don't seem to be in the right places on the gel.

I conclude that we can use either mystery oil or laser lube. 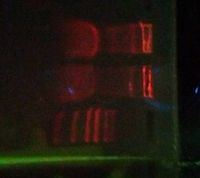 At about 19:42, we have all six lines of the ladder and something that looks like a line in the third lane somewhere about the 3rd or 4th rung on the ladder (which is what we are hoping for)

Result was visualised on 1% agarose gel stained with 2ul/40ml of ethidium bromide under 300nm UV. DNA ladder was visible. Both samples showed a faint blur running ahead of the ladder and no other information.

I conclude that the DNA extraction technique is inadequate.

Detailed thoughts on what might be going wrong: /results-20120311 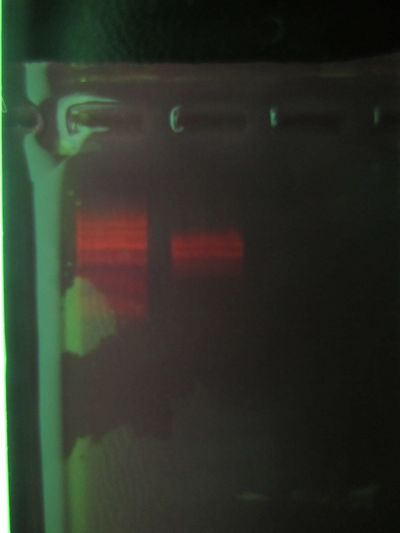 The moment of truth

After such a great result yesterday it was disappointing to see a non-result today: 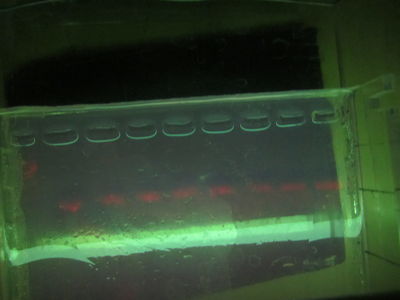 No result. Extreme left is (warped) ladder, other wells show only primer bands extending way beyond the ladder

It's interesting in itself because we used a positive control thanks to Tom, plus known-good primers (also thanks to Tom). This suggests that the problem with intermittent results is the physical PCR process itself, rather than DNA extraction. (The previous good result already suggested that the primers and master mix weren't to blame.)

The major problem seems to be quality of the extracted DNA: PCR product is frequently quite faint. As of April 26, 2012, DNA extraction technique will be the main focus for the amelogenin test (and for genetic testing of human DNA in general).

Complete protocol as of June 2012

Given that we get this working, it should provide a basis for further experiments. As far as I understand it, it is possible to apply this sort of technique, with appropriate primers, to do detection of SNPs [12] opening up the possibility of testing for something common like RHD or MC1R alleles, and perhaps providing a resource for people who want to genetically test themselves for rarer things a la Katherine Aull (but it is much simpler and cheaper to get such tests run commercially, and there is a difficult ethical case to answer about providing genetic testing without proper expert medical support and interpretation of results).

We can also test for nonhuman DNA, i.e. non-genetic diseases caused by viruses or bacteria; test the provenance of various foods (fish in general and sashimi in particular would seem like a good option); or attempt DNA fingerprinting to identify particular people (I haven't looked into this but would guess it involves a few different primers targeting highly-variable portions of the genome).