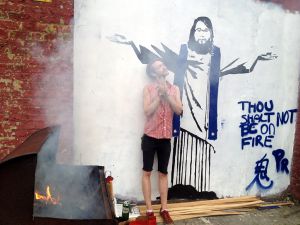 Charles the Redeemer (Carlos Redentor) is a painting of Charles Yarnold in London, UK; considered the largest Hack Deco painting in the world and the largest image of Charles known to exist. It is 2.5m tall and its arms stretch 2m wide.

The idea of erecting a large painting upon the Hackspace wall was first suggested in the mid-1850s, when Catholic priest Pedro Maria Boss requested financing from Isabel, Princess Imperial of Brazil to commission a large religious painting.

Maintenance work needs to be conducted periodically due to the strong winds and erosion to which the painting is exposed.