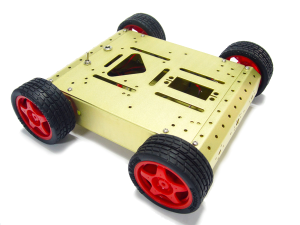 The 4wd mobile platform base for ARP

I know what you'll say. ARP stands for Address Resolution Protocol. Although I agree that reusing acronym is not best practice, on the other hand in this case context should suffice. I don't use the word arp often enough to warrant an other name, which I think it's easy to remember.

The project is about constructing an autonomous rover. It will be most likely be 4WD, packed with a number of sensors and cameras (perhaps kinect).

One of the central ideas about the robot is that it should, one day, be able to identify a UK socket and plug and charge itself when the battery requires it or anyway find a way to auto power itself. To achive this and more we are to build and mount an arm on the rover to be able to do some tasks at different heights, like charging for instance.

The project is open source

I think that once you can do these things, you can do so much more. I would like to make the robot play with the dog (or kid one day) and one day interact around the world both physically as well as wifi/bluetooth/upnp, etc.

tryexcept is moving abroad. The project will still carry on, but we will be developing the bots separately while collaborating on the ROS/Control layer

Hardware
Off the shelf 4WD Aluminium platform, easy to start with but will probably have to upgrade as we learn and hit the limits
raspberry pi for running ROScore
Arduino Mega(for low level control)
Arduino motor shield v.3 (just because it's easier!)
Kinect
Bespoke manipulation arm (a project in itself)
Software
[ROS] for higher level processing
Arduino firmware, interfacing with ROS

For now here we will list all the components I have that could become handy within the rover. The full list will come here as more parts of the project come together.

1) Go around the room and map it Status = can read from sensors and move all motors and servos, need to control from ros now.