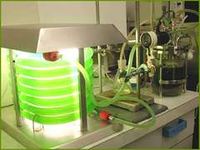 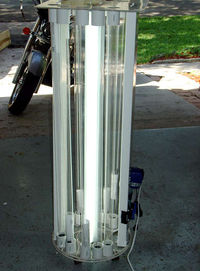 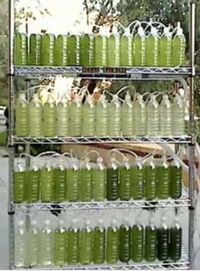 Biodiesel production aims to use vegetal or animal oils as a renewable substitute for ordinary diesel. The UK is presently committed to deriving at least 5% of all transport diesel from biodiesel by 2013. It has powered jetflight and (when mixed with ordinary diesel) UK trains. It would be interesting to start probing the possibility of homebrew production.

The Hackspace doesn't have a field, so we have to explore algal biofuels. Microalgae are also attractive because they provide much higher yields of biomass and fuels, 10-100 times higher than comparable energy crops, and algae biofuel is non-toxic, contains no sulfur, and is highly biodegradable.

Whilst it would be wonderful for the project to eventually be able to harness enough solar or heat energy to not require a net input of chemical or electrical energy, it's not likely that we can either source enough light or drive the reactions efficiently enough for this to be feasible.

Presumably aquatic algae (Hydrophilus) are the way forwards. Two alternatives: open pond or closed. There doesn't, for now, seem to be a problem with starting off in flasks (on a shaker table, for example) and then looking to move to slow-circulating streams through tubes wrapped around a light source (for example), and then seeing if we can scale up to south-facing rooftop raceways (wide, shallow circuits). Sources online suggest that culture density will increase to a point where light cannot penetrate more than 10cm.

Things that would be good to have

Things that would be good to have

Algae can have doubling times inferior to a day, so if the conditions are right, growth should be extremely fast.

We need to think about nutrients. Being able to rely on wastewater and other nutrient sources (used coffee grinds?) would be fantastic; perhaps initially we should use standard aquatic fertiliser to ensure nutrient stability and sterility.

A strain capable of living at high or low pH would help us keep the system sterile (without having to regularly drain it and clean it then re-innoculate) in much the same way as sourdough cultures create their own inhospitable conditions to keep parasites out. S. dimorphus tends to increase the pH 9reduce the acidity) significantly, and optimum pH is 8.2-8.7 ; mature cultures will consume CO2 faster and tend to push this up to 9 (which will inhibit growth) if not properly aerated.

Perhaps someone with Arduino smarts could design a system capable of monitoring temperature, pH and light absorption, allowing us to remotely monitor and log growth, make adjustments and comparisons between growth rates.

Here's a table with different algae and their oil content: http://www.oilgae.com/algae/comp/comp.html Here's a commercial source (US based; any domestic/EU based alternatives?) www.utex.org

Harvesting means removing cells from the tank and somehow separating them from the water; you want a paste of at least 15% solids before attempting oil extraction. Harvesting will be a relatively big challenge, if the wider field's reported experiences are to be believed. There are several options:

Chemical: hexane, isopropyl, acetone? Depends on the fatty acid we need to solubilise, the cell wall/membrane we want to break up, etc. This likely requires a lot of experimentation and reading.

Whilst you can use the oil obtained above directly, you get a much more useful fuel if you convert the fatty acids to biodiesel. Here we'll use a base (Sodium hydroxide or potassium hydroxide, most likely; lime can also probably be used) to catalyse the reaction between alcohol (which we'll add; probably methanol) and the fatty acid/triglycerides produced in the previous step. This will produce our end product and glycerol, which is denser so should separate out. Ideally we're only getting 2% byproduct on this step, but if we get more, don't worry; if you've seen Fight Club, think back to how they're producing soap. Similar, eh?