UPDATE: Project completed using one of the GoogleTV box donated to the space. Still need to build a stand for the keyboard and to plug in some speakers for audio. 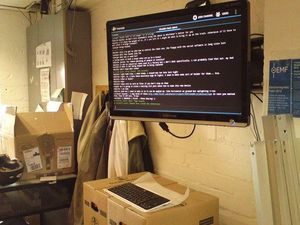 We miss having a second IRC access in the lobby so let's set up a new one. The previous access has been removed for security reasons as it was linked to the doorbot.

The idea is to connect to the lonely screen mounted on the Hackspace lobby wall an IRC machine with keyboard/mouse. It will also display a LHS screensaver (Hackspace related photos, employee of the month pic...).

I've tried to use the old Dell “Marconi” laptop with Ubuntu/Xchat installed but it kept powering off and is a bit too slow so now looking for others options:

- or we could go the Raspberry Pi route, more discreet and elegant than a big desktop.

- Does anybody have an unused desktop they could donate to the space for that project? Maybe we already have 1 available in HS?

- Or anyone with Raspberry Pi skills who wants to help out setting that up?

To contact me: marc DOT barto AT gmail DOT com

Here is the lonely screen looking for a friendly IRC machine: