To make a fully open source soft/hardware lasertag system, and to have a set of usable gear

I've always loved laser quest and quazar growing up, and now I have some of the skills, and the vast resources of the space at my disposal I think its time to turn my childhood dream into a reality!

I was lucky enough to play at "Harrys Quazar" in Bristol (and occasionally laser quest), it was the testing ground for the new features of the Q-2000 system. With more than just point and shoot. Powerups were included in the basic games, including "Rapid fire", "Armour peirosing bullets", "smart bombs", "grenades" and many more. And to play new experimental modes of play, "midnight" (all lights on packs off), "Spy" (where one member of each team would become a spy and have to kill their own), "Eliminator" (5 lives and your out) among many more.

I want to make gear that is easy as writing an xml file and uploading it to the packs to totally change the game play, to make adding a gps module, or heads up display just an api away from being part of the fun.

The big idea that I had was to make the guns/sensors effectively just IO devices for android/ios phones. Once a phone can register hits/shots we can start pushing those into custom rulesets and registering them on some central game server. Given that most android phones are gps/compass/bluetooth/internet enabled there is a lot we could do with them.

It also gets kinda neat when people that want to play install the app on their phone and can show off stats from previous games.

MilesTag offers a protocol to use, but is quite limiting. Such as, you can add ammo clips from a ammo crate, but their is no feed back to let the crate know, and remove a clip from its inventory.

OMNICORPDETROIT LaserTag - Bare bones Arduino based laser tag from one of Detroits hackerspaces.

Because of this and other limitations MilesTag will be used as the base, but will be extended far beond this, and will not aim to be backwards compatible.

I've been looking at the milestag protocol and it looks a bit crap, I think we could implement our own easily enough. Sending data over IR at 38khz is pretty simple, we could even use an existing protocol (RC5/6 or one of the NEC) ones from TV remotes. All were sending is "LOL I SHOT YOU AND MY NAME IS TOM" - tomw

From a microcontroller processing side version 1 of miles tag is quite nice, and using a protocol that isn't likely to be in use by anything else around it would be nice. That said I would like to mod miles tag rather than use all of it. What bits of it don't you like? - sol

How can I help?

Areas that need your help: 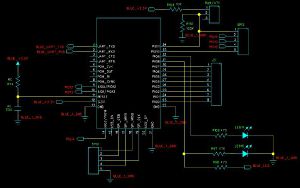 My plans for the electronics are to allow for the game to work as stand alone with out needing a mobile. This means that, when connected, the phone can request to take over as many or as little functions as it wishes. This also gives the controllers fallback should connection to the phone be lost mid game.

Electronic for Laser Tag - Low level system view, hardware and components rather than concepts and ideas.

in the process of tidying this