JimM's first design for a pizza printer. Feel free to criticise or plagiarise.

This design uses a linear transport above the pizza and a rotating platform for the pizza. It doesn't cook pizza or make bases.

Current pros and cons of this design:

I want to use removable cassettes for each type of topping. These need to be dishwashable. I'm planning on making them out of a suitable plastic, probably by modifying an existing container. They need to be modified to hold a grater blade on the base. This takes the form of a sliding sheet half of which is a grater or mandoline blade and half of which is smooth plastic.

The grater needs to be selected according to the food. Cheese should use a normal grater, mushrooms and pepperoni should use a mandoline blade, and tomato sauce should just be a plain plastic sheet with a slot in it.

While the cassettes are waiting to be used, the smooth plastic should be under the hopper. When the cassette is used, linear moving parts attach to both the hopper and the grater blade. If these are moved together, the food just moves around, but if they're moved at different speeds then the hopper should dispense.

The machine isn't intended to be refrigerated, so the cassettes need to be removed and stored in a fridge at the end of the day. 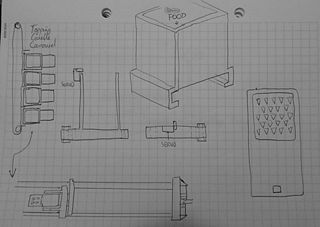 There are two components which attach to the hopper and grater respectively. Both of these ride on two smooth rails which stand above the pizza surface. There are also two screws (lead screws ideally, but threaded bar will do) which move the holders back and forth. Each holder is linked to one of the screws. The two screws are rotated by geared motors at the end of the screws.

The holders have a servo motor on them which allow them to securely hold the hopper or the grater slider.

The rails will be above the pizza surface, so we need to use stainless steel and make sure we use safe lubricant if any (olive oil?) 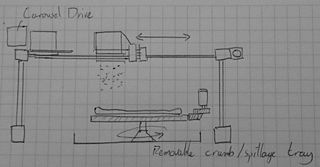 The pizza base is just a rotating platform. It'd be good to have some form of position feedback on this, but not essential. 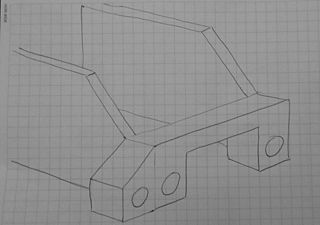 The carousel holds a series of different food cassettes which move on a linear belt. The main transport can place and remove things from the carousel, so it only needs to move left and right to select the next ingredient. It'd be good to have some sort of barcode reader on the hoppers to determine which cassettes have been loaded in each slot.

I hacked together a mockup of the linear transport. 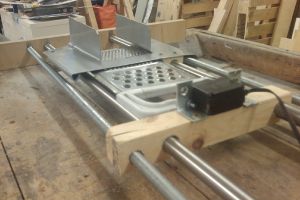 This is moving pretty well, but I haven't tried using it on food yet. I need to find a suitable supply of containers and graters that can be put together. Also, this version isn't clean so any food processed by it would be wasted.