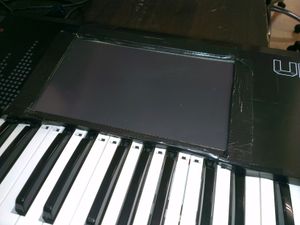 The intention of this project was to embed a computer of some sort with a touch-screen into my MIDI keyboard to enable the use of VST instrument software live without a separate machine. Also meant to replicate the functionality of devices such as the Roland Fantom to some degree.

Initially, I had thoughts of using a Mini-ITX sized board for this project but upon measuing the internal dimensions of the keyboard, I decided against this in favour of a netbook motherboard. Now, the project is based around the motherboard from a Lenovo Ideapad S10e that had a broken screen but was otherwise in good working order, purchased on Gumtree. The specs of this computer are as follows:

This was fixed to a piece of mdf with some standoffs, then bolted to the aluminium base.

The existing hard drive didn't have enough capacity for my 200GB of audio samples (only a 160GB drive) but I didn't have enough money to buy a new drive. So I purchased a 22-pin SATA extension and spliced a an external power supply into the power leads so supply the 12v needed to power a 500GB 3.5" drive I had lying around.

The touchscreen is an iMo Monster 10" screen, powered by DisplayLink and is completely fed by single USB cable. This cable splits into two for data and extra power. The data cable goes to one of the two motherboard ports and the other goes to a 4-port internal hub into which the keyboard is plugged, along with two external ports. This hub is fed from a 1.5A 5v supply I found in the basement. These three power bricks (motherboard, SATA power, and 5v) are all powered from single mains cable which I spliced onto the end of the other three, and are fixed to the back panel of the case.

The shell of the keyboard is mostly aluminium which I had to cut with an angle grinder to make the recess for the screen to fit into.

I wired up a small red momentary normally-open switch to the motherboard power switch and this is mounted in the top panel next to the screen. I also ran a headphone extension cable from the on-board jack to the front-left edge of the keyboard for use with headphones. The entire assembly weighs just short of 14kg now.