Solexious put up signage around the space, to make it easier to describe where to find something. He also put up a "Space open, please knock" sign, to allow the front door to be put on latch.

The New Space Search is now full steam ahead, and we are aiming to start looking around potential new space during June and July.

We hope to finish the build-out by October to avoid the harsh winters in the existing space.

The space will be quite busy on Saturday, so if you can't usually make it during the week, join us for some hacking. 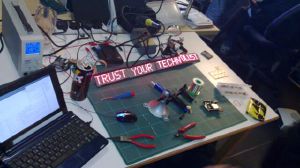 Solexious's LED board has progressed to displaying text sent over serial (see right).

Solexious helped Oni etch his first pcb in the space. Using the AAA (arduino auto agitator video) the boards came out well with no visible breaks in the traces. But a lack of time means we will have to wait to find out if they work.

After the sad death of the extruder head, Glen worked tirelessly throughout Tuesday to swap it out for a new head, but didn't quite get it working.

A sad lack of cheese this week, but made up by cookies and other tasty treats.