We got some lockers from ebay: http://www.ebay.co.uk/itm/2-Door-Metal-Staff-Electronic-Keypad-Locker-Blue-and-Grey-Finish-/121122632797

They use cheap Chinese electronic locks, which we'd like to automate.

The locks take 4xAAA batteries, and have a reset push button of some sort under the battery cover on the inside.

There is a USB mini-B connector on the bottom of the keypad, externally.

There are three LEDs on the outside: amber (code failed), red (battery low), and green (opening).

Some of the locks are glued to the doors. 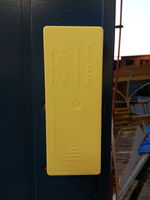 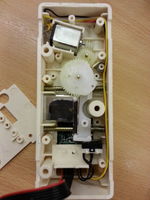 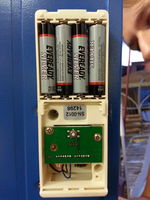 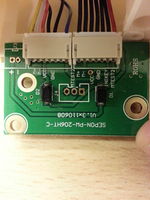 Chip is painted, but is still visibly a Holtek HT66F40:

Board has sticker on:

There's a header on the left (from chip side) labelled JISP, with pins:

and in the middle at the bottom, a USB breakout:

P/N is reprinted variously around the board as S/N. 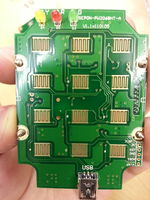