We currently have two external-to-the-building phones. One is inside the cage to the rear of Ujima House, our Wembley location. The other is just outside of the cage, in the car park. 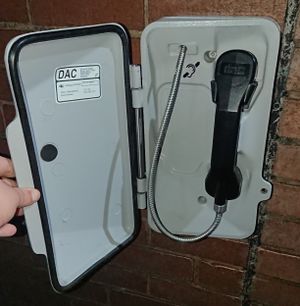 The car park phone acts as an intercom and "Hot Dials" all the internal phones. This allows visitors and delivery drivers in the car park to announce their arrival. Someone can then go and let them in.

Usage is simple, just open the door on the phone and lift the handset. After a brief pause you should hear an announcement and the phones inside the building will start to ring.

It's also possible to ring the Car Park Phone from another handset, if required. 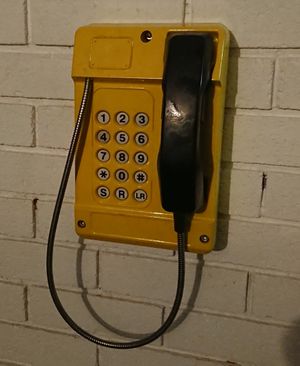 The cage phone has a keypad, and can make and receive calls to / from the other Hackspace extensions. Its been placed in the cage so members can make Emergency Calls, or perhaps someone from the kitchen can ring the cage to let them know the kettle has boiled.

To make an outbound call, lift the handset and wait until you hear a dial tone. Then dial the number you wish to call. Due to the nature of traditional telephony and the ATA configuration, there will be a short delay until you hear ringing.

The two phones are connected via an Analogue Telephone Adapter (ATA) which converts the traditional POTS analogue phones for use with our SIP based PBX.

We're currently using a Cisco ATA 186, along with a PoE adapter. They are stored in the metal enclosure labelled "Analogue Telephone Adapter", to the right side of the backdoor as you look at it. The ATA is plugged into port 22 of the Cisco switch in the workshop.

The ports from the ATA are connected to a single CAT5E ethernet cable using RJ11 connectors. The cable heads outside into the Cage Phone. A second cable runs from the cage phone to the car park phone.

Colour code is below: