Discussions on the list highlighted great interest and demand for cheap Ethernet enabled Arduino compatible boards. A plan was hatched to produce a number of these boards for members and possibly for sale. Increased volumes would result in lower unit cost.

Meurig is currently constructing some similar boards using plans from Instructables and is therefore likely to be a good source of information. These boards are being etched at the space and are of 'through hole' type.

The prototype Ethernet Arduino has now been put onto a compact pcb and is now called 'Nanode' A batch of 100 Nanode boards will be produced at the hackspace in early June. See the separate Nanode Wiki page for all current progress. Nanode also now have a website: http://www.nanode.eu. 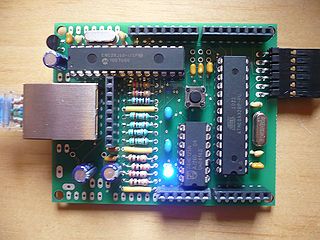 The Arduino has had internet capability for the last couple of years following the release of the "Official Ethernet Shield" in 2008. This was based on the WizNet W5100 ethernet controller chip and will work at both with 10Mb/s and 100Mb/s. It is available in the UK for about £26 [1]

Whilst a very capable and well supported shield, the cost of the Arduino and ethernet shield together is the best part of £40. Other ethernet controller devices are available, and these started to attract the interest of the AVR hacking community, as a means of getting a very low cost ethernet connection for AVR based projects. These used the Microchip ENC28J60, which is a simpler and cheaper device than the W5100, but still offered acceptable ethernet connection and the means to build cost-effective micro web servers and web clients.

This project intends to build on some of the existing offerings (see below), to produce a low cost board fitted with ATmega328 and ENC28J60 which will allow simple servers and clients to be developed for about half the cost of an Arduino plus official shield, thus enabling this technology to be opened up to a wider user base.

A few members of the London Hackspace have decided to produce a batch of these ethernet boards, for the benefit of the members, and use them as a hardware platform on which to host fundraising training courses and workshop sessions.

It is possible that two versions of the ethernet board will be ultimately produced so as to meet two specific requirements.

Regarding the ENC28J60 paired to the ATmega328:

If you just want to knock something up quickly and cheaply on a breadboard it can be done for about £12 with a stripped down version. It can be programmed and powered using the FTDI serial cable - becoming a standard bit of kit for talking to microcontrollers. Ken has prototyped this and it is successfully sending temperature readings up to Pachube. Pachube Feed Another board is using John Crouchley's GET sketch to retrieve and print this same data from the Pachube feed

The remainder of the parts came from Farnell Components:

You will also need:

This draft is purely to show that the parts will fit onto an Arduino sized board Size 52 x 68mm, and that a route is achievable. Improvements will be made to the component placement and there is likely to be some change to the choice of Magjack connector - because of discussions elsewhere about PoE compatability. It uses entirely through hole components so easy to hand assemble, and it is intended to take standard Arduino shields. This, I believe is a good compromise, as it allows anyone to build it, it can be used as a project for training courses or workshops and as a regular Arduino. A 6 way connector allows it to be connected directly to an FTDI cable for programming. Standard AVRISP connector fitted for bootloading. 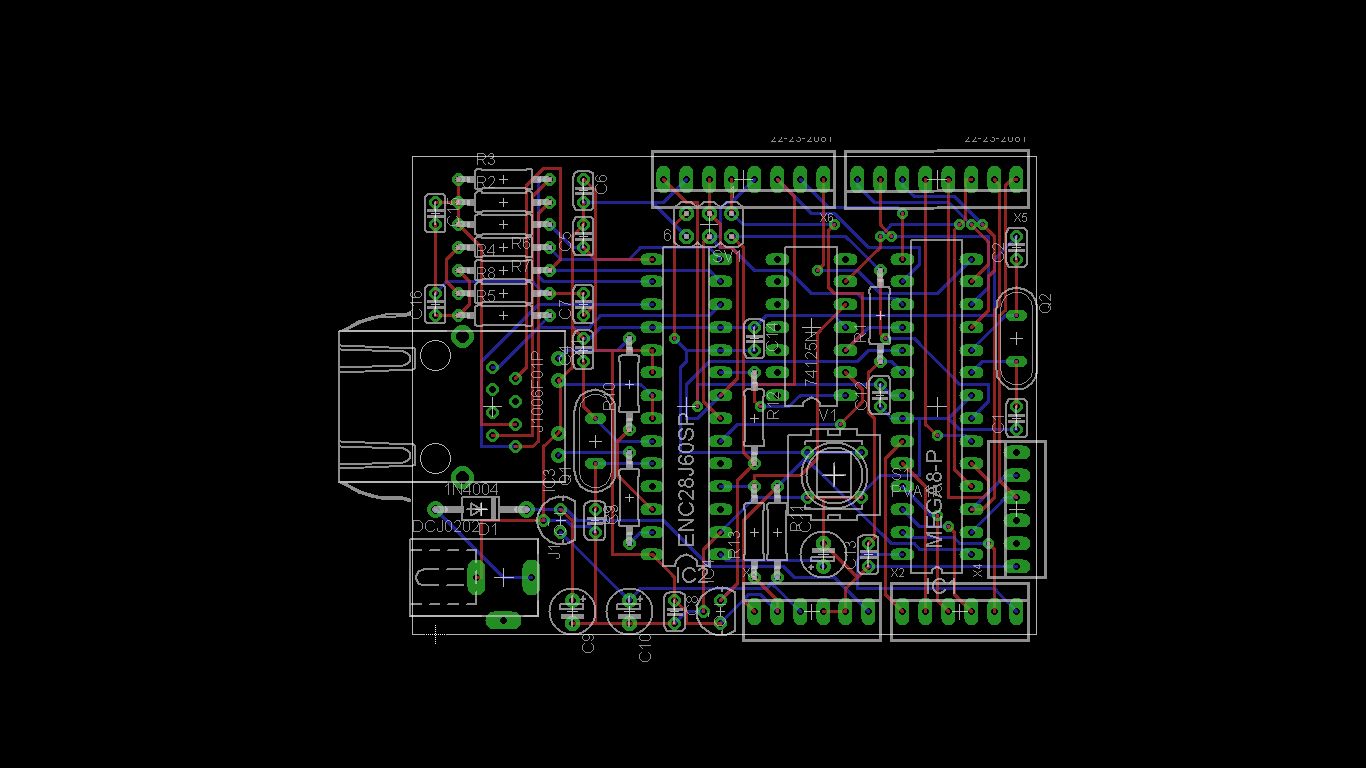