Files are being kept on our teams GitHub page. 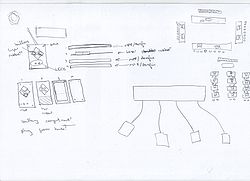 Seems laser rubber is commonly ~2-3 mm. The top most layer will have to be thinner, MDF/plywood probably not a good idea. Will probably use 2 mm acrylic instead.

Either choice should have accommodation for tidying up trailing wires when not in use. Maybe use the same kind of design as most headphone-tidy wraps.

Ciarán - I'll try and design the case, electronics will need to be done by someone who know's what they are doing.