The Xmas 2013's Project is the first Common Project that NJA is going to introduce at the meetup, people are welcome to help and join it. The last meetup we decided what kind of project to introduce and we chose something about Christmas.

The idea is to make a Christmas Tree with some bunch of stuff like: 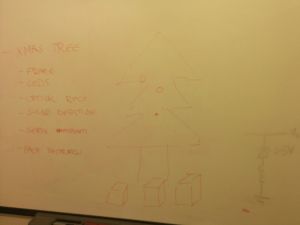 What do we need

We need you! We need people to join us the next meeting and help us on this awesome project.

Bring over your ideas, your spare parts to make this amazing project and let's hack it!

Here are People that are in the project, please follow the google group as well.

We are rising money for extra bit to make the project, we got 30 pounds ( 3 people gave me them ) and the next meeting we will think about how to drink/spend them :)

Here are tasks to complete in the new few weeks (TBH):