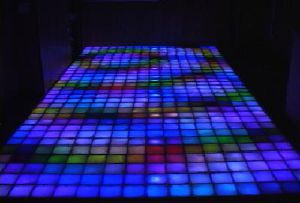 The aim of this project is to create a USB-controlled, Arudino-powered 70's-style disco dance floor, inspired by a similar project by a student at MIT. It will act as a modular, low-resolution RGB display. Each pixel will be 6-8" per side, and it will come in 4x4-pixel modules that can be connected together.

The board, firmware, and controller software will (of course) be open-sourced.

The prototype is just a small bit of veroboard (in fact, slightly too small... it is one hole shorter than I really wanted!) with the traces cut between holes using a Dremel.

I plan for the main body of the module to be made of wood, with some sort of frosted/diffused acrylic top. It needs to be strong enough to handle a relatively large number of people jumping up and down on it, as well as potentially spilling drinks etc. 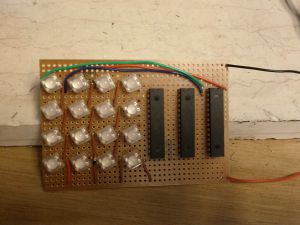 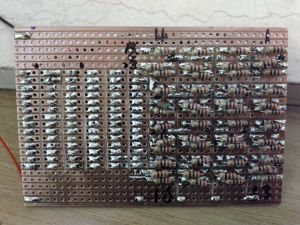 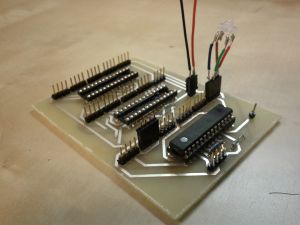 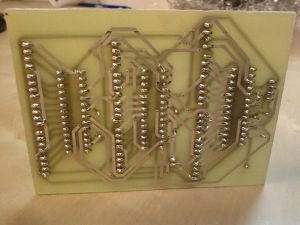 Version 2 of this project will provide RGB+UV for each cell, with pressure sensors. Ideally the pressure sensors will have a resolution of one cell, so that the floor could be used for games (e.g. Tetris or a mash-up of Dance Dance Revolution and Guitar Hero). The Arduinos (or other microcontrollers) will be embedded into the board design, and the PCBs batch-produced. The board will also have a 4-port USB hub built into it, for inter-module communication.

Note: Tetris requires 10px wide by 20 high for the playing field. DDR would require ((NPlayers * 5) - 1)px wide. It looks like the floor would have to therefore be a minimum of 3x8 modules for Tetris, and probably the same for DDR (but perhaps shorter). For two players, DDR requires a minimum of 3 modules wide, but the height could be relatively variable. The example floor to the right is 3x7 modules.