Not Just Arduino 20th May

We had a great workshop thanks to Michael Margolis who is up to come back talking to the group. Find below all the documentation:

Our members would like to hear about these topics. If you want to come talk to the group or if you are just interested into attending a session please add your name on the page.

Hack The Hackathon announces “The Connected Rally”, nearly 200 cars, wirelessly connected through the cloud, driving together on a multi-city journey, with over 100,000 spectators, many more following online, and a collection of specially-designed mobile apps. When: 14-16 June at Google Campus

Digital Futures is an open studio showcase presenting groundbreaking new work and offering a space for participants to share work and ideas, but also a platform to network and nurture discussion and future collaborations. This session presents brilliant collaborations between engineers, scientists, artists, technologists and students showcasing projects and prototypes built during the NASA led International Space Apps Challenge and Urban Prototyping hackathon.

London’s first Mini Maker Faire will take place at the London College of Communication on the 6th July 2013. You can get a free ticket here now.

Following recent discussions, we agreed it was a good time to use Twitter to promote our events and host our pictures on Flickr to bring more members and visitors. We certainly now have the room for more attendees and the space needs more members. As example the Music Hackspace has actively promoted its events and brought a lot of new and interesting members.

mentar is working on getting the robot arm (see picture) working for the HSRDP project. It is a hackspace project and is everbody is welcome to contribute. 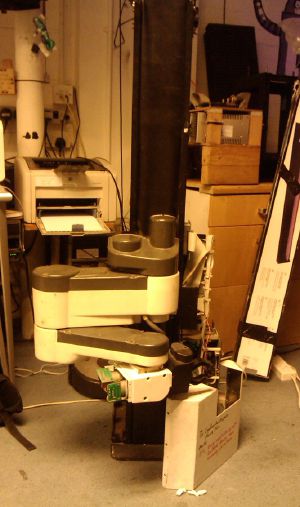 Robot kit by Arduino, aimed at the novice and teaches you how it’s made as you build it, but it also doubles as a base platform from which you can build your very own custom robots.

The lower board is the Motor Board and handles control of movement through the onboard motors. The upper board is the Control Board and is used to manipulate the sensors that ultimately tell the Motor Board where to go. Each board has an ATmega32u4 16 MHz processor with 32KB of memory. The whole thing is powered by 4 AA batteries, but can also run from USB power. It also features an LCD display, LED lights, a speaker, compass, IR port, wheels, and room to attach extra sensors and other hardware. Arduino Robot is a circular device with a diameter of about 7.5 inches, and it measures about 3.9 inches high.

Upgraded version of a well know Arduino project which recognizes your facial expressions and turns them into light using a webcam.

By the same maker a similar project using only voice.

Easy-to-assemble hexapod kit & controller that enables servos to also act as sensors to control the force applied as well as measuring force at set positions. Robots are thus enabled to sense surface edges and uneven servo load as well as measure and maintain gripper force.

Useful listing of open hardware boards. And here is another useful resource page on how to get online with your Arduino.

Release of a new version of the Arduino software, version 1.0.5. Barring any unexpected bugfixes, this is the final planned release of the 1.0 series of the IDE. Future releases will be from the 1.5 branch that has been in beta since last summer.

The Yun is the first member of a series of wifi products combining Arduino with Linux. It is a combination of a classic Arduino Leonardo (based on the Atmega32U4 processor) with a Wifi system-on-a-chip running Linino (a MIPS GNU/Linux based on OpenWRT).

It’s based on the ATMega32u4 microcontroller and on the Atheros AR9331, a system on a chip running Linino, a customized version of OpenWRT, the most used Linux distribution for embedded devices. Like a Leonardo, it has 14 digital input/output pins (of which 7 can be used as PWM outputs and 12 as analog inputs), a 16 MHz crystal oscillator and a micro USB connector.

Not exactly a new project but a good way to get involved or to get inspiration from: The Air Quality egg is a sensing device which facilitates a community-led network that gives people a way to participate in the conversation about air quality.

The Air Quality egg monitors gives local Co2, No2, Temperature and Humidity levels. Reading from the Air Quality Egg can be shared and compared on a web-based crowd sourced dashboard.

Specs: contains two NanodeRF SMT's, one with an Air Quality Egg Sensor Shield (temperature, humidity, carbon monoxide and nitrous dioxide sensors) + mini fan and the other with an Ethernet controller and an RGB status LED which illuminates the egg housing. The sensor egg should be located outdoors (but undercover) and the base-station egg plugs into your home Internet router. The units communicated via 433Mhz RFM12B.

Hope to see you all on Monday 3rd June 7PM